Growth and Headwinds : What business perspectives for the Chinese Year of the Tiger?

China grew 8.1% in 2021 after a 2.2% growth in 2020. At the same time, during that first pandemic year, the rest of the world economy shrank by about 4.1%. China’s development during the pandemic has generated continued considerable business interest, so much so that foreign direct investment reached an all-time high of USD 179 billion in 2021 despite extraordinary restrictions on international travel into China.

Yet China’s 2021 fourth quarter growth was an unusual 4%. Looking at 2022, international economic institutions have downgraded China’s growth prospects for 2022 to around 5%, while the US economy is expected to increase by 4.1%.

In a more challenging economic environment, understanding the sources of China’s coming development becomes more and more important for business success. So, with our wishes for the Chinese New Year, here is a short analysis that we hope will be useful.

Over the last 10 years, manufacturing labor wages have tripled in China. One would think that such cost increase would have reduced China’s ability to export, considering the competition with other lower cost countries such as India, Vietnam, Thailand and most of South East Asia.

Astonishingly, China’s exports grew an extraordinary 29.9% in 2021, after a 3.6% growth in 2020. On average for the two pandemic years, China achieved more than 16% per year increase in exports. And that is while US import tariffs imposed by the Trump administration in 2018 are still in place. 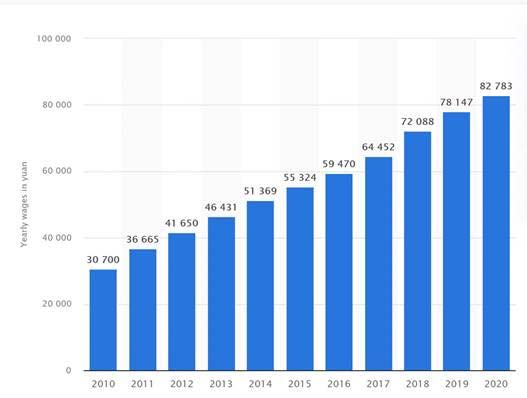 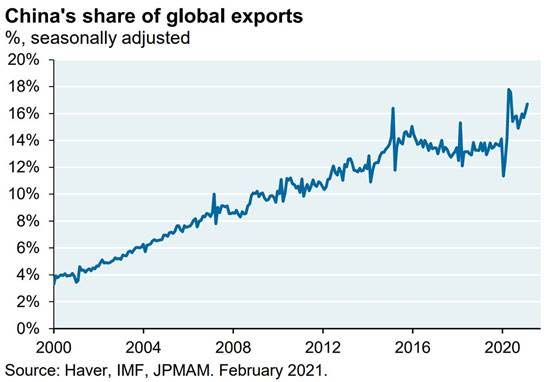 As a matter of fact, China has gained export market share worldwide since 2000.

The pandemic certainly helped China’s exports: consumers all over the world spent more of their income on computers and refurbishing their homes instead of travelling and going to restaurants. Nevertheless, China’s factories have proved to be continuously more efficient.

Still, such level of growth in exports, which accounted for about 20% of China’s GDP growth in 2021, could not be sustained in the long term, particularly when the pandemic is brought under control.

Urbanization is still a key source of growth, but peak employment is in sight

China’s Prime Minister announced in May 2020 that 600 million Chinese still live on 1’000 yuan per month (about 140 USD). Most of these Chinese live in the countryside and are therefore not accounted as part of the urban households. the migration of these rural Chinese taking employment in the cities, earning additional income and consuming accordingly, is fueling China’s growth and its fast growing middle class. 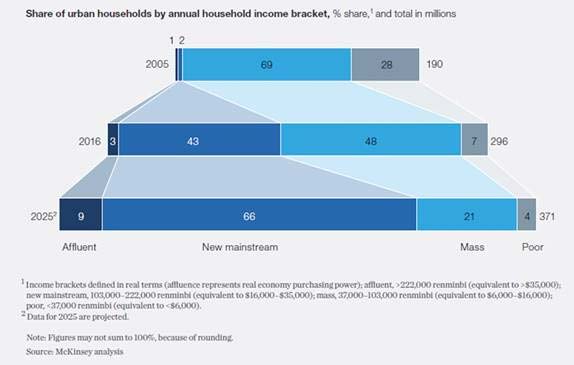 No wonder then, that China’s luxury consumption increased 49% in 2020 and another 36% last year. This puts China on track to become the world’s largest luxury market in 2025 accounting for about 40% of global luxury sales (according to McKinsey and Bain). 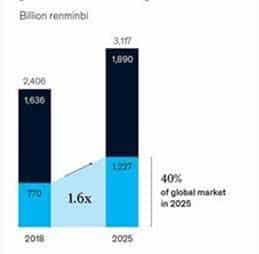 Yet, this trend will also run its course as China is reaching its peak in population and employment.

2021 marked the year when births in China reached their lowest level in modern history, on a par with the great famines years of the early 1960s. A Chinese academic warned that China’s population will be cut in half in the next 45 years if birth rates do not increase.

With negative population growth and rural citizens migration declining, the time when urban employment reaches its peak is coming up too.

As a result, growth in the future will need to come essentially from improvements in productivity: the same number of employed Chinese need to generate more revenue per person. 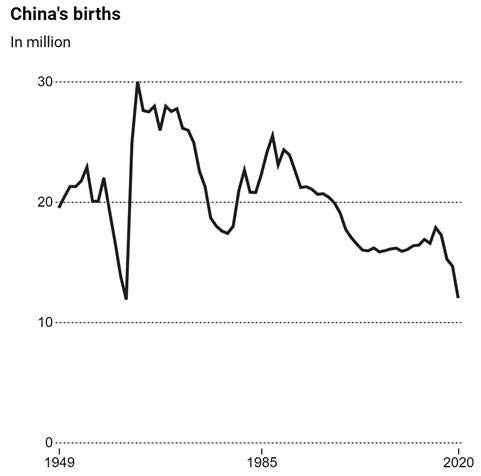 The real estate boom comes to an end

Besides, the real estate industry and its related sectors (such as construction, interior decoration, appliances) accounts for 25% of China’s GDP. Sales and prices have been going up every year, but the sector was clearly in a bubble: 91% of Chinese own their home (twice as many as the Swiss!) and only 12% of new home buyers are first time buyers. 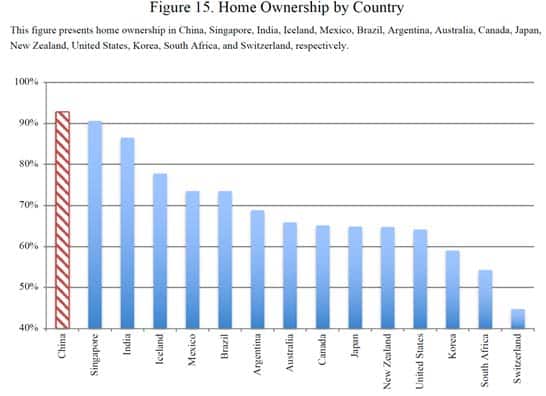 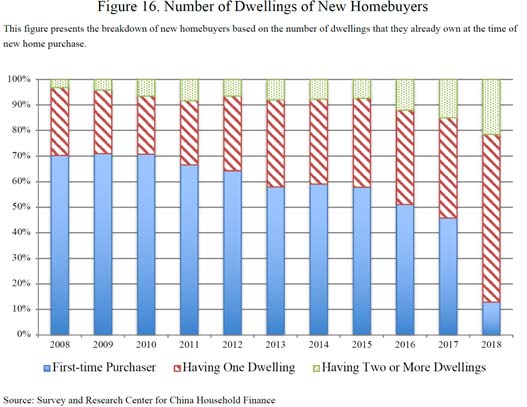 Understandably, the authorities have taken action to deflate the bubble, launching the slogan “homes are for living in, not for speculating”. The Evergrande real estate developer “slow motion crisis” is the direct consequence of this situation.
And while it is quite unlikely that the Chinese real estate developers cash difficulties will turn into a financial crisis in China, it is nevertheless clear that the real estate sector cannot be a contributor to growth anymore.

The “Double Circulation” strategy to push productivity and reduce dependency

In May 2020, the Chinese government announced its new “double circulation” strategy. Simply put, in order to reduce its dependency on technology imports and boost local production and consumption, China intends to localize key technologies.

Indeed, when Chinese purchase an iPhone, which is made in China but first exported to Apple and then resold into China, more than 50% of the added value is collected abroad. If Chinese buy a Huawei phone, the additional revenue generated in China will instead add to the local GDP.

Another example is the production of China’s homegrown commercial airplanes. Strikingly, only the structural parts of the aircraft (fuselage, wings, empennage, radar cover) are made by Chinese companies. All more technology intensive components of the plane are made by international aerospace firms. 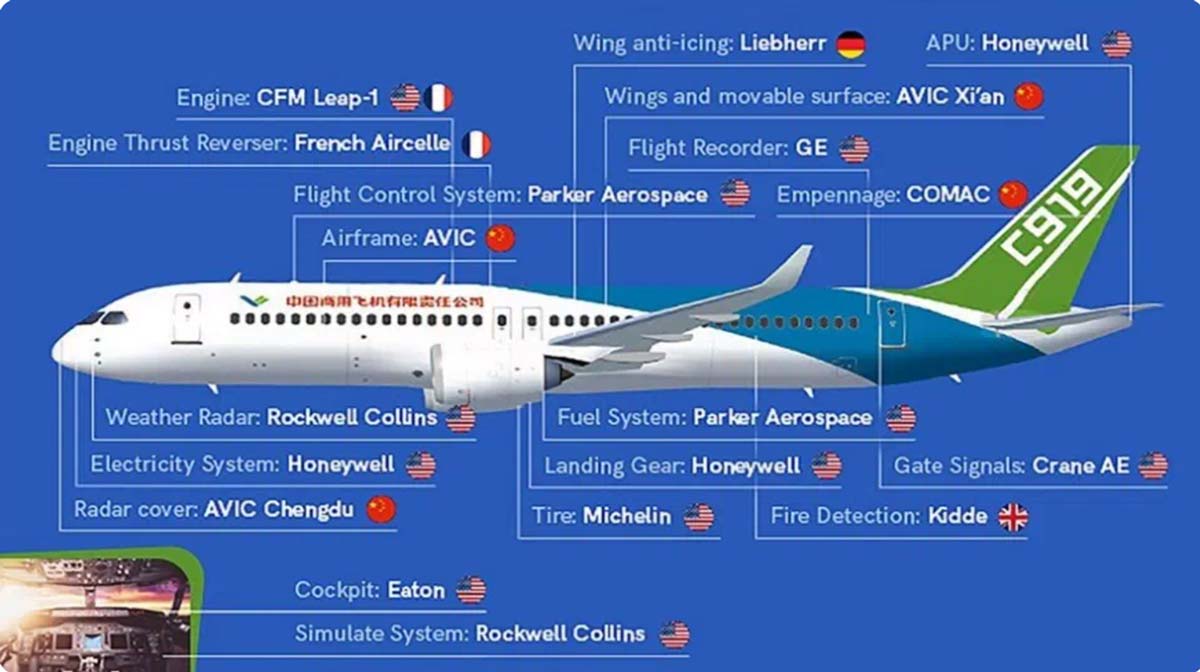 As a result China has embarked in a huge program to stimulate innovation and the development of local technologies. No specific plan and no figures have been clearly announced, yet the amounts involved are certainly in the trillions of USD.
But industries and technologies to be supported have been specified:

What’s in it for our international businesses ?

The auto industry, which was forced to localize through sino-foreign joint-ventures since 1985, is a good illustration: despite strong localization requirements, foreign know-how, new technologies and management has been necessary for local success:

And, if additional indication of this trend is needed, despite the fact that China has put e-car development as a priority since 2009, Tesla has today 25% of the China market, the biggest share of any car maker (400 local companies are sharing the rest 75%!).

Besides, reducing technology imports while expanding exports will exacerbate China’s trade surplus and create very strong pressures for the Yuan’s appreciation, which in turn will cause difficulties to exporters.
As a result, China is also strongly promoting the import of consumer goods into China, creating more opportunities for this industry internationally.

All in all, big changes are under way, but big opportunities, some existing and some new, still abound in the market. The year of the Tiger is traditionally a difficult one, but international businesses can chose to ride this Tiger year, and roar with it!

China Integrated is designed to facilitate the long-term, superior success of its clients in China.

With 20 years experience and comprehensive in-house expertise in research, legal, recruitment, tax, finance, IT/ERP & public relations, China Integrated is specialized in establishing or acquiring successful businesses and managing the back offices of its clients.