As the world’s biggest trade war intensifies, it’s essential to make sure you understand the situation and how it impacts the global economy.

Do investors need to be concerned? If so, what's the best course of action and how can you weather the storm?

What is the US-China Trade War?

The US-China Trade War is certainly not new. China and the US, the world’s two largest economies, have been facing off for more than a year. However, the situation is continually changing as new tariffs are issued and tensions heat up.

The latest round of tariffs came into force on Sunday (1st of September) as Beijing levied 5% on US crude oil, further expanding the list of products caught up in the trade war. Since the trade war started, tariffs have been placed on billions of dollars of goods, including everything from meat to musical instruments and machinery and motorcycles.

At last count, the US had imposed tariffs valuing over $360bn (£292bn) of Chinese goods, and China has lashed back with tariffs on $110bn (£89.39) of US products. With China and the US continually going back and forth, it’s impossible to see an end in sight.

What’s Behind the US-China Trade War?

China, on the other hand, claims that the US feels threatened by the country’s growing economy and is trying to maintain its global status.

While both countries ultimately stand to lose the most, they’ve been unable to reach an agreement or find a solution to the ongoing trade war.

How Does the US-China Trade War Impact on Chinese Economy?

China is currently the world’s largest exporter, with over $2.2 trillion of production sent overseas. 18% of its exports go to the US, making the States its largest trade partner.

Imposed tariffs and the ongoing trade war significantly impact China’s economy as well as neighbouring regions. With increased trade conflicts, the Chinese economy has slowed with manufacturing contracting for the fourth month in a row. The Chinese yuan also reached an 11-year low last week, which sent investors scrambling for a safer alternative like the US treasury and gold.

However, it’s important to remember that while the Chinese economy is slowing, it’s not collapsing and some industries, like fixed-assets and industrial production, continue to grow.

What’s the Impact of the US-China Trade War on Us Economy?

Likewise, the American economy has also suffered setbacks as a result of the US-China trade war. For the US, the most significant impact is evident in the import of goods and services, with imports expected to fall by 4.5% in 2020.

American goods have also been subject to imposed tariffs impacting roughly $75bn (£60.95) of US goods. Following President Trump's latest tariff hike on Sunday, September 1st, Beijing levied tariffs on 1,717 items of a total of 5,078 products originating from the United States. 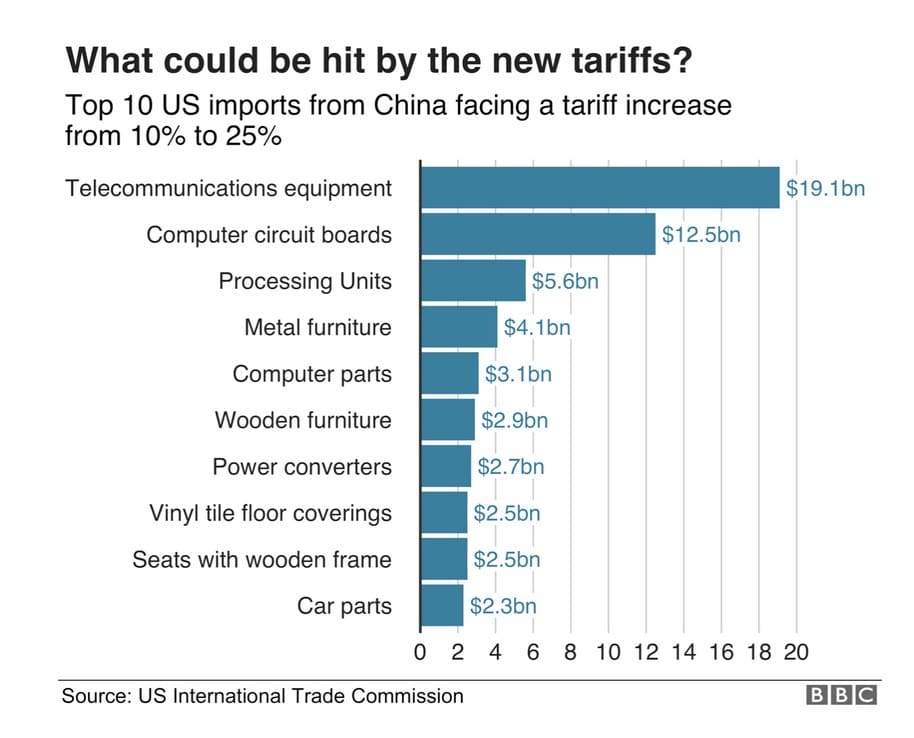 How Does the US-China Trade War Affect Other Countries?

Neighbouring countries, like South Korea, Taiwan, Malaysia and Singapore, have close economic links with China which leaves them particularly vulnerable to the trade war. Roughly 1.6% of Taiwan’s output, such as computers and electronics, are linked to China’s exports with the US. As a result, these countries exports are suffering the fall out with South Korea reporting exports at a nine-month low.

Countries most dependent on US exports to China, like Canada and Mexico, are also facing similar situations. However, these countries are not as exposed to the trade war as China’s Asian neighbours.

The Impact on Global Stock Markets

Regardless of export exposure, the US-China trade war has influenced world financial markets. The uncertainty impacts investor’s confidence and, therefore, willingness to invest in the market.

Last year, Hong Kong’s Hang Seng index fell by more than 13% while the Shanghai Composite crashed by 25%. 2019 has been a better year with 12% and 16% increases respectively.

Research also shows that if tariffs are expanded to include all US-China trade, markets will slump and the global GDP could take a $600bn (£487.61) hit in 2021.
US and China Trade War Opportunities

While the US-China trade war has certainly created some challenges and instability for investors, it’s also created unique opportunities. As the US and China trade war continues, many investors are looking at moving production to alternative countries.

Thailand, India and Vietnam are becoming some of the top countries for foreign investment with many considering Vietnam as one of the biggest beneficiaries of the trade war. The country now receives 7.9% of its GDP from additional US imports.

The Chinese government is also attempting to keep foreign investors by improving foreign investment laws, provide additional protection from local governments, enhance intellectual property rights and expand its market. These efforts seem to be working with direct foreign investment into China from the US increased by 65.6% in Q1 of 2019.

What’s Next for the US-China Trade War?

Both China and the US has threatened additional tariffs within the upcoming months. The US has already announced plans to increase tariffs on some Chinese products from 25 to 30%, a 5% increase. China will undoubtedly retaliate with tariffs hikes of its own.

The BBC predicts that by the end of the year effectively all Chinese goods and over 3,000 American goods could be subject to tariffs.

Become a member at INAA and start building powerful worldwide business relationships. We connect clients across the globe to expand your knowledge, opportunities and drive business growth. Find out more about becoming a member or sign up for our newsletter to stay up-to-date.