At the Start of its fifth Decade of (re-)Development, where is China Heading?

Before trying to evaluate the economy and its opportunities, it is important to try and understand the reasons why China is behaving the way it does today, after 4 decades of unprecedented and highly successful development emphasizing economic freedoms and social progress.  This period has lead to the rise of an extremely dynamic private sector, contributing now about 80% of the employment. It is particularly extraordinary when we remember that, before that, China had practically only state-owned enterprises!
To illustrate the incredible distance that China covered over these decades, one cannot avoid looking at economic measures.  In 1980, China’s GDP was only 75% of Switzerland’s; today China adds more than the equivalent of the Swiss GDP to its own, every year!
Those who travel to China also realize how mobile technology pervades every aspect of life, including paying everything and everyone, having fresh food ordered online and delivered home within 2 hours, ordering taxis or using bikes to rent at every street corner. This embrace of the internet has made life extremely convenient for all Chinese, it also shows that China is now developing its own social and business models.  China’s basic research and hard technology may not be at the peak, as Huawei’s and ZTE’s dependence on US components has shown, still China is forging ahead with its own, different socio-economic ecosystems.
This came as a surprise to many, particularly to leaders of western societies who were convinced that China’s economic liberation would, as in some other areas of the world, follow a one-way and reasonably straightforward road, leading to its population undertaking ever more responsibilities and freedoms to become more and more prosperous.
But we forget two important historic factors when we extrapolate China’s economic and social development.

While humans developed civilizations, created cities and countries on all continents (the Aztec and Incas are two of them in the Americas), the “western civilization” (it started in Mesopotamia, but then migrated through Egypt and the Near East, to Greece, Rome, Europe and North America) essentially took over the world by conquering all other organized societies.
Or so we think! There is one exception, actually: the East Asian civilization which was born in and grew along the great plains of the Yellow and the Yangtze rivers of China.
Though there were contacts between China and the West since millennia (the ladies of ancient Rome already loved Chinese silk), China developed pretty well insulated from the rest of the world, protected by seas in the east and the Himalayas and hilly jungles of South East Asia in the south and west.
Invaders regularly came from the north reason why the Great Wall was built. But even when a northern people, like Genghis Khan’s Mongols, took control of China, they maintained its administration and adopted its much richer and much more comfortable culture. Historically, the Mongols became for the Chinese just another dynasty. Such takeovers happened regularly, yet China, as a civilization and a culture, was never really challenged until the mid-19th century. That is when Europeans and Americans forced the Emperors to accept trading ports under the control of these foreign powers coming through the seas. For the first time in the 5000 years of Chinese history, these new types of invaders did not adopt China’s culture but started to bring their own into the country.
From 1842 when Hong-Kong was appropriated by the United Kingdom until the founding of Communist China, the Middle Kingdom went through what the Chinese describe as their “Century of Humiliation”. It ended with the Chinese recovering control of their country, but by that time, China had become economically very small, accounting for just a few percents of world GDP while being home to 20% of its population. 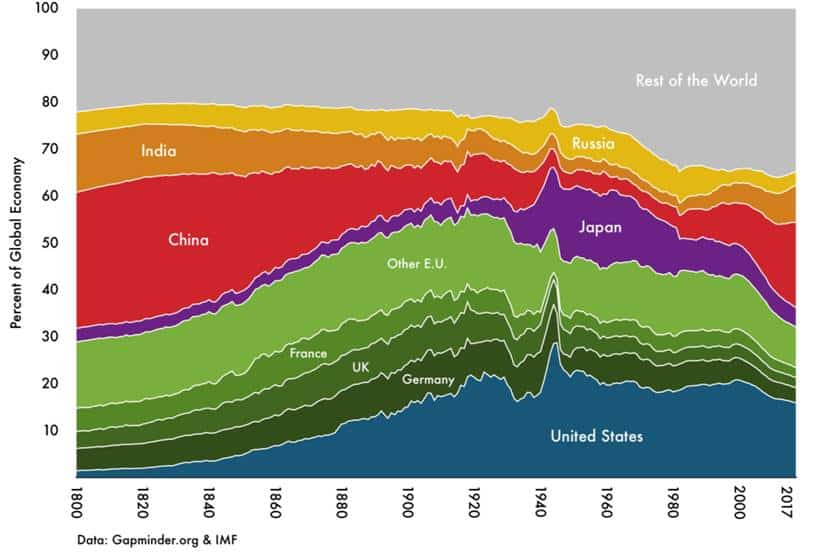 The second element to keep in mind, is China’s historic position in the world and particularly Asia.  While the Communist Party gave back to the Chinese the basic dignity of independence and self-rule, in 1949 China’s position in the world was very far from what it had been only 150 years before. In 1800, as the industrial revolution was just gaining steam in England, China was, by far, the largest economy in the world. It amounted easily to 30% of world GDP!

Today, as shown on the chart above (adjusted for the cost of living (in purchasing power parity - PPP), China is economically larger than the USA and close to the EU. (In todays’ dollar terms, however, the USA’s GDP is still 50% higher than China’s.). But it is still far from the position that China held traditionally and its population is well aware of that.
In almost every Chinese person’s mind (90% of them, according to polls realized by a US institution, the Pew Reserch), the day will unavoidably come when China is, again, the biggest economic power in the world.  Xi Jinping, the Chinese President, made it clear again 3 months ago when he said on the 70th anniversary of the People’s Republic: “No force can stop the Chinese people and the Chinese nation from forging ahead."

China follows its own path

If one bears in mind these two world-defining elements of China’s history (a different civilization which was the superpower of its known world only 200 years ago), China’s trajectory becomes much easier to interpret: China simply intends to recover the position it always held.  In its President’s own words: ‘realizing the great renewal of the Chinese nation is the greatest dream for the Chinese nation in modern history”.  (If you think it sounds very similar to a shorter slogan from another President, you may not be the only one!)
To give China the position its leaders (and its population) strongly believe it should have, they trust in using the unique characteristics of China’s successful development of the past decades. That is essentially a mix of state and private economy under an unchallenged top-down system: “Government, the military, society and schools, north, south, east and west – the party leads them all”.
After all, China has been managed by a top-down administration for 2 millennia and, in fairness, the Communist Party’s track record in managing the country’s development over the past four decades is extraordinary. And, on the other hand, the debacle of the Great Recession of 2008 justifies doubting, at least, the validity of the US form of western socio-economic management.
And the Chinese population is very much convinced of its government’s ability; foreign-run surveys (the Chinese government does not conduct polls) show what everyone living in China realizes: the Chinese government is supported by its population by a large majority (70 to 80% depending on estimates). This gives it all latitude and legitimacy to continue China’s development, in the Chinese way.

Then, what are the economic implications?

The state-owned economy will keep much of its advantages 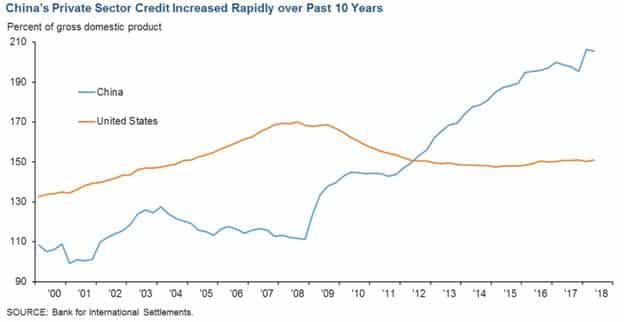 Though up to 90% of new jobs and 60% of growth comes from the private sector, it is clear that the state-owned enterprises (SOEs) will retain their pre-eminence. They are the levers that the government uses to drive the economy. If the economy goes down, more infrastructure projects are launched and executed by the SOEs funded through loans issued by the state banks (SOEs too). Facing a gradual and probably unavoidable slowdown in growth, the leadership, supported by its strong belief in top-down management, will not reduce its own ability to influence the economy.
However, the total level of China’s debt is such (estimated at 300% of GDP, higher than any other large economy except Japan) that further financing of the growth in its current way is limited. (The chart below shows a comparison with the US for the private sector debt only, in which China’s debt growth has been the fastest.)

Under the circumstances, the private sector remains critical for China’s growth and the government regularly launches new initiative in its support.
Besides, foreign investment (estimated at 9.7% of GDP in 2017 so around 18% of the private sector) is also much sought after, not only for its ability to generate growth but also for its quality. Industry zones have been constantly looking for foreign investors and offer land price discounts in Shanghai of up to 60% compared to 3 years ago.

Sticking to its top-down management concept, the government intends to influence all enterprises, not only the SOEs it directly controls but also the private ones.
China’s answer to the paradox of wanting to control a private sector while leaving it its economic freedom, is the much talked about social credit system.  The administration will compute a rating for each enterprise in China (state-owned, private and foreign) and, depending on the rating obtained, apply punishments or rewards which will take the form of easier access to government support, bank credits and less frequent government audit. Positive points could also be obtained by following policies promoted by the government, such as buying an electric rather than traditional vehicle.
A rating system based on the same general principles will also be generalized to all individuals in China. Those blacklisted (there are 13 Mio of them today) are not permitted to take high-speed trains or buy flight tickets, among others.  This is a completely new approach to government which we may find completely outlandish. It is again an illustration of China taking its own way and, if needed be, a confirmation that China is ready to innovate at government level too.
But, if anything, foreign enterprises are generally more used to be compliant. So as a whole, we are convinced that the social credit system will actually force local companies to follow regulations as foreign one do. Eventually it will favor those who already believe in being fully compliant.

As much as we would like to think differently, the US-China conflict will unfortunately not be solved by a trade agreement. Tthe worldviews and systems applied in the two countries have such different roots, that it is prudent to assume that the conflict will last for years, if not for the whole decade that is now starting.
The announced agreement, however, should have the benefit to yield a modus vivendi and to allow a step by step resolution of the conflict, which will minimize business disruptions.  Meanwhile, China’s and the USA’s growth (and by consequence the development of the rest of the world) will unavoidably be negatively affected.

Development of the Chinese domestic market 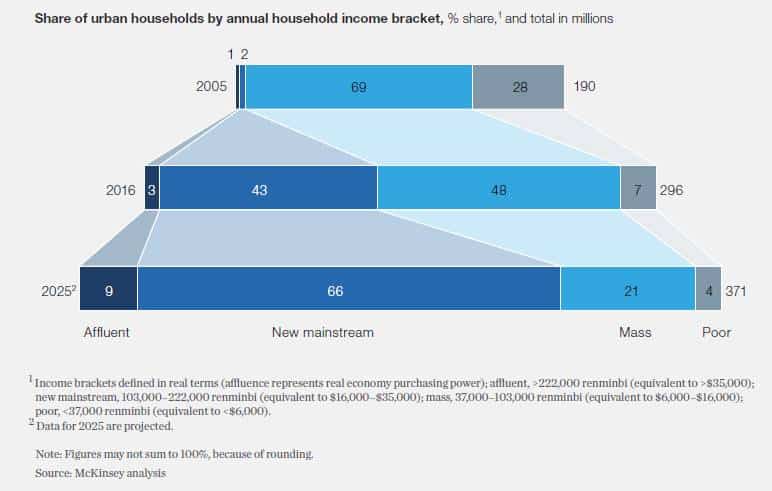 In order to rely less on debt and investments for growth and, in addition, to avoid relying on the rest of the world, China’s government will continue to push for the development of domestic consumption and innovation.
At the same time, consumers are becoming more and more quality conscious, generating fast growing demand for high quality products. This is true both for equipment goods (such as machinery) and consumer goods. As a result, the incredible rise of the middle class and the increasing sophistication of Chinese consumbers will continue to provide numerous opportunities for foreign enterprises. In fact and despite the growth slowdown and the numerous headwinds, we see that Swiss companies continue to develop new businesses and to expand in China.

Indeed, the market in itself, regardless of the level of its growth, has now become a key opportunity for most international companies. Dealing with China is becoming day by day more complex, but the Swiss and all those who believe in following regulations are certainly best equipped to keep growing in China.

We do wish you a most healthy, happy and prosperous start of this new decade, which will bring us, undoubtedly, its numerous lot of new opportunities!

We hope that the above can be of support for your China strategy and plans. For more information about this topic, do not hesitate to contact [email protected]

China Integrated is designed to facilitate the long-term, superior success of its clients in China.

With 20 years experience and comprehensive in-house expertise in research, legal, recruitment, tax, finance, IT/ERP & public relations, China Integrated is specialized in establishing or acquiring successful businesses and managing the back offices of its clients.